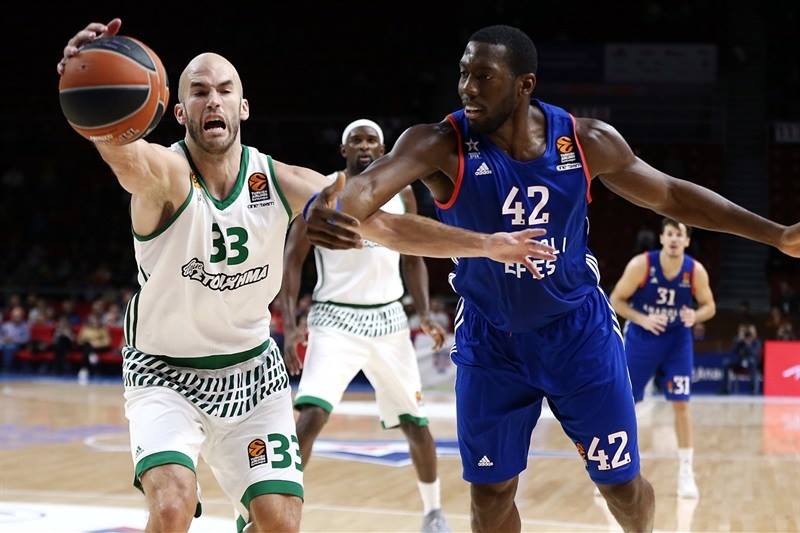 In a battle between two clubs that have offered historic games in the past, Anadolu Efes hosted newly-renovated Panathinaikos in a match-up that appeared to be one of the most intense situations we have observed so far this season. High tempo basketball, peak-level physicality, huge clutch plays, with all of the above leading to the 11th double-overtime game in Euroleague competition’s history.

The Turkish side was the winner, although the Athenians had a lot of chances to secure a valuable road win. However, they failed to impose their total control in small details, which proved to be decisive for the result. Coach Perasovic managed to reverse an uncomfortable situation by taking advantage of his team’s physicality. Approaching each team’s performance by looking for specific facts that played crucial roles in the game’s result, one can note some interesting aspects, with a focus on the sport’s general direction.

European basketball has gradually transformed, leaving behind almost everything that has to do with the low pace, low mistake, old-school style. It has entered the high tempo, high physicality age, and if a team decides not to apply this playstyle the expectations are limited. Both teams follow this school (as expressed by their floor generals Heurtel and Calathes), but Anadolu deserves extra credit for the way the team applied this advantage to grab a win that seemed to be lost. After a first half of Panathinaikos controlling the pace, Velimir Perasovic seems to have instructed his team to attempt to totally outmuscle the Greens — thus managing to retrieve control via his team’s athleticism, despite Dunston having serious problems facing Chris Singleton (especially in the first quarter).

Brown, Honeycutt, and Dunston combined for 35 (11 offensive) out of 51 Efes rebounds. They outplayed Panathinaikos’ frontline in the second half, forcing them to choose three-point execution after being unable to post-up effectively. This difficulty seemed to have an impact on both the technical and the psychological side of PAO’s game. Efes’ defensive aggression was not limited to the paint, but the Turks spread their presence putting chains on the Panathinaikos creators. Think of how many picks had to be set just after passing the centre line because of Anadolu’s players over-pressing every passing lane — easy paths to the rim were hard to come by. The most characteristic example of this situation is the final 4th quarter possession for Panathinaikos.

Bryant Dunston using his footwork and size against Nick Pappas, Dogus Balbay closes out — aggressively shutting down the Greek’s left corridor, forcing him to stop dribbling and lose his balance. Then, a desperate but successful pass to Rivers and all of the Efes defensive aggression in one snapshot: four players outside the three-point line and the only one just inside it (Tyler Honeycutt).

Speaking of Honeycutt, one cannot pass him without noticing his exceptional presence. 38:20 minutes of playtime, 15 points, 4 assists, 13 rebounds and 0 (!) turnovers. His stat sheet is a confirmation of what Honeycutt truly is: if someone had the chance to choose a player who expresses the all-around dynamic nature of European basketball, Tyler would be one of the top choices. Thinking of every Euroleague roster, one definitely struggles to find a situation in which Honeycutt would not fit-in. The comparison with Baskonia’s Adam Hanga is one of the most interesting conversations for forwards around Europe (I would go with Hanga because of his greater offensive abilities). Against Panathinaikos, he fully expressed coach Perasovic’s two-way basketball, serving as the coefficient whose tendency toward hustle-ness changed the momentum.

On the other side of the moon, Panathinaikos left Ipekci with feelings of mediocrity. A road win that could have been secured ended as a loss because of small mistakes in the final possessions. However, the loss did come only after a performance that showed obvious improvements in team function — with certain interference by coach Pasqual. Nick Calathes seems to be in his best form since returning to Athens, and when Mike James recovers we are going to be watching one of the most energetic backcourts around Europe. The problem is that Calathes has a burden too heavy to carry now, with the rest of the team’s guards seemingly unable to cope with his creative role. In Istanbul it was almost a one-versus-four situation, with Efes lining-up Heurtel, Granger, Cotton, Balbay — all of them at least decent ball-handlers.

The positive point in the Panathinaikos performance is that the team seems to have found a more standardized offensive and defensive fluidity — this becomes clear when one considers what happened with the Greens’ defense nearly ten days ago in Bamberg, after their first defensive switch: clear paths to the rim, lost match-ups, and easy points were not part of Istanbul’s performance, especially when PAO had the starting line up on the court. Offensively, KC Rivers’ presence cannot stay unnoticed. The American presented all of his offensive artillery, executing a wide-variety of plays. He is effective in fighting his way through screens, catching the ball while prepared for instant shot-release, able to create his own space to shoot after dribbling with the left hand, and he’s also wise enough to choose driving to the rim when the pressure does not allow him execution from distance. In the mental part of his performance, Rivers seemed to trust himself, not afraid of executing during the most intense moments of the game.

Focusing on the negative aspects of Panathinaikos’ performance, the most important questions come regarding the Bourousis-Gist presence, and the mental status of Nick Pappas. Watching Bourousis trying to defend using his (non-existent) footwork to protect the rim, or when having to follow a faster opponent is a distressing spectacle. The Greek bigman always needs weakside help, but in at least two occasions Gist did not help in a way so obvious that it almost seemed to be by order of coach Pasqual. Panathinaikos’ frontline cannot stand such situations, and an unprotected Bourousis can be a serious wound — greatly degrading the quality minutes he offers offensively.

But this duo’s problem can also be discussed in terms of offense. Bourousis is the quintessential post-up bigman, and in order to apply his style he needs to be the low-post anchor — either scoring or passing the ball. With James Gist alongside him, the Greek does not have the necessary space to proceed. With Gist too close, defenders have the opportunity to tease Bourousis, while the American is also unable to offer a significant three-point threat. A solution could be the use of a Bourousis-Singleton duo, with the American in a stretch-4 role — creating the space needed for the Greek bigman (this would also create problem in Panathinaikos’ rotation with Gist-Fotsis not being functional and competitive for a lot of minutes).

The other big matter is Nick Pappas and the way he handles himself during the game. Everyone knows that he is an instinctively score-first shooting guard, but in order to cope with this competition level, one has to fall back for the common good. Again, his complicated mentality is already known, but without a vital change in his thinking he will not be able to step-up and be a stabilizing presence at the highest level. There were at least three cases when he decided to call his own number despite having an open sniper on the perimeter. Coach Pasqual has an enigma to figure out, if he wants the most of his player — Unfortunately enigmas sometimes hide negative surprises. As Pappas ages, his window as a project-type player on a would-be powerhouse team like Panathinaikos narrows — he only has so much time to figure things out.

The Efes-Panathinaikos clash was Euroleague at its best, no doubt. But let me add one worrying observation, of the big picture variety — at a certain point in the game (and it was an extremely important one) we saw something really interesting on the court: nine Americans plus the American-bred Nick Calathes. EU players’ production and their improvement is a matter of immediate research. Otherwise, the whole Devoted to Euroleague Project is going to end up as a second NBA D-League.